Well. Maybe I spoke too soon when talking about being alive and well! But, I can attest that I am, in fact, Alive.

Being well is another issue all together! Bottom line. I'm back on my feet again. Remember THIS? Well, since that time, I have had a weak, cheap, ugly immune system. When I get sick, I get SICK. I end up in the hospital. I end up with an IV. I end up unable to walk. You know, things like that.

So I ended up sick. With Strep Throat. And it sucks. So the week before Christmas I spent a lovely weekend eating through my veins, and curled up in a ball.

Consequently, my daughter had a pre-op appointment in Anchorage a few days before Christmas, so our entire family rushed to Anchorage for Christmas. Which was OK because we were able to spend the holiday with the other kids in Palmer.

So...in short this is what happened in the past three weeks.

Anyway...I took my camera and have not snapped ONE PHOTO since being here. I don't know if it's cause I was sorta sick, or what. Anyway... I'll have a few tutorials coming up. (Cause I promised to do one and then...blah, didn't.)

So, we're alive and well. Thank you. :)
Scribbled by Finnskimo 4 comments:

My daughter's BFF dog. Her Princess Beyonce (That's what she wanted to name her. We said no!)

We got Fritz when she was just a wee little Ewok from a guy (Guy, that's his name!) here in our town. We thought that Kaisa was old enough to be responsible for her, clean her messes, take her on walks, etc. And she was, usually. I've had to clean my share of messes, but in the end, Fritzy is a good dog. 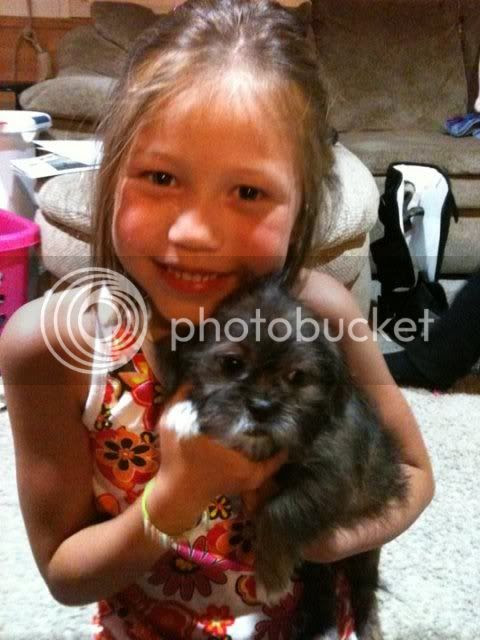 She's the only dog that I've known who will watch Television constantly and try to jump in the screen! We moved our TV onto the wall because of that.

The other day, I shaved her (She's part Terrier, mostly Shitzu) and didn't really notice anything different, except that she did not want to play with Magnus, our beastly dog, who she LOVES tormenting. She just sat around all sad looking. I thought she was PMS'ing.

When the morning came (yesterday) my daughter screamed that her eye had popped out. Literally, her eye popped out of her head. So, I started calling around, Googling little dog's eyes popping out of their sockets, etc. We do not have a Veterinarian in town, the closest one is 600 air miles away, and you have to take a jet to get there. We do, however, have a "dog lady" who will check out your dog or cat for you for $20 and tell you to send her to Anchorage! 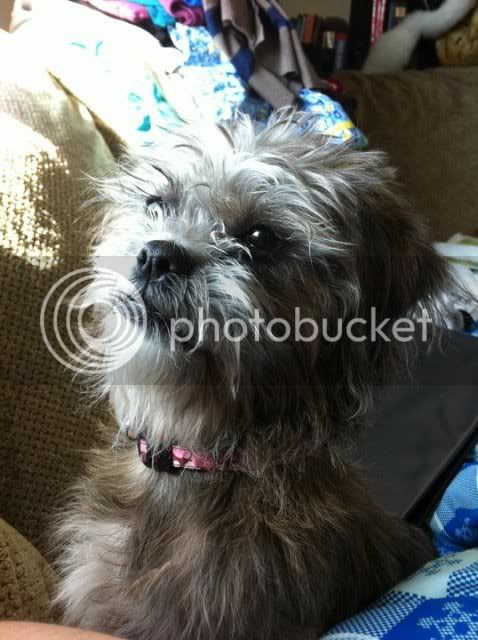 So, we did that. And thankfully I have awesome friends, so one friend took Fritzy as baggage (she even sat First Class!) and another friend picked her up and dropped her off at a Doggy ER in Anchorage.

And $950 later, Fritzy is up and at 'em, she is less one eye, but apparently it doesn't bother her cause she's having the time of her life, meeting new friends!

We are very happy she is still alive, and though we will now have a one-eyed dog, that's OK. Kaisa says that she can be a pirate next year for Halloween! :)
Scribbled by Finnskimo 7 comments:

Of me! Nah, it's no secret. If you're my Facebook Friend you already know that I'm a sucker for punishment so I string myself along most of the time on coffee, and good carby bread.

I realized that maybe I am just a teensy bit "busy" when I was asked to film something and I literally could NOT find a spot this week to do it. Which sucks, because it's sort of my job to film it! My email went a little like this: 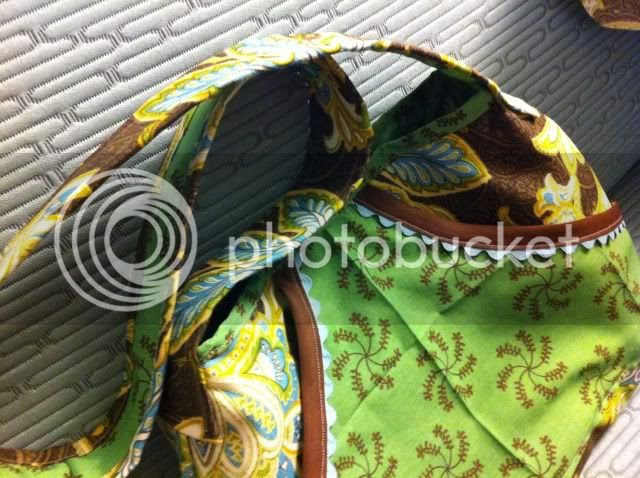 Atikluk Purse
"Oh hi. Let's see, my schedule is as follows: M-F 8 am - 5 pm I am at work. Monday night I teach sewing class at Church from 7:00 - 9:00, and I have to make dinner sometime between work and class... Tuesday and Thursday I have Zumba, so I can't do it those days. Wednesday is the School Christmas Program (I was wrong, it's Thursday) so I will be busy with that... Friday I open the church up for those who want to finish their sewing projects from the Monday before. (Last week I did that). Saturday morning I have Zumba at 9:00 am then I'm hosting a Christmas Bazaar at the Long Term Care Center until 5:30, I also have dress rehearsal for the Church Christmas Program from 2:00 - 4:00 p.m. Saturday, that hopefully my sister will take care of. And then Sunday morning is the kids Church Christmas Play that I am not going to miss..." 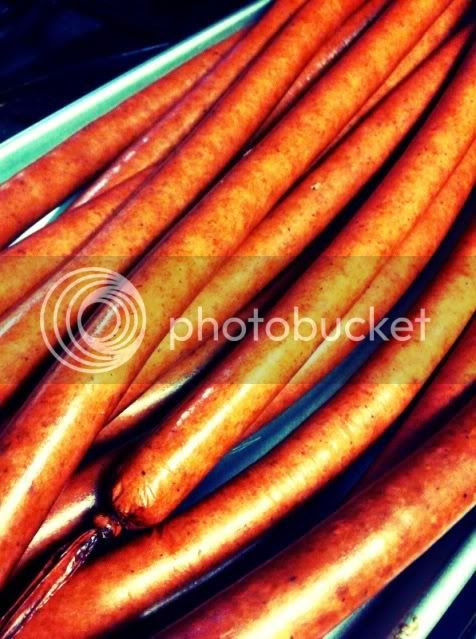 Homemade "Meat Sticks" smoked and baked.
And all this between making dinner (I made my own Garam Masala last night for Caribou Tikka Masala, and it was SOOOO GOOD!), and sewing the Christmas Presents I'm making for family this year, AND finishing all the random projects I'm doing for other people (mittens, hats, purses, bags) so THEY could give Christmas Presents to people... AND finishing all the stuff for my own table at the Bazaar. 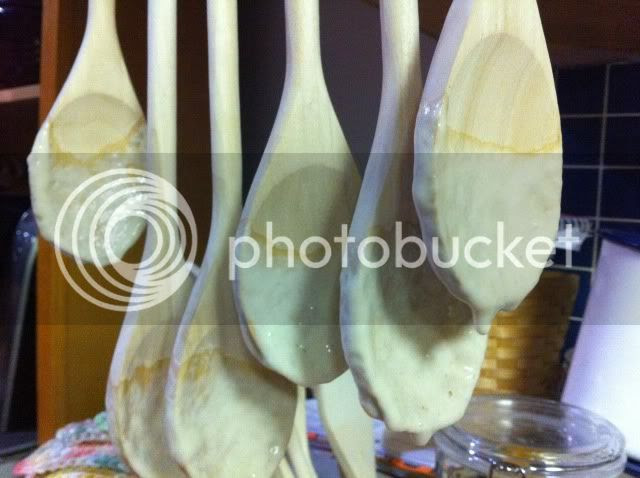 "Sourdough Starter Spoons"
To top it all off, we have done NO decorating this year because we found out the baby (8 yr old) will be getting her Tonsils out December 27th, which means her Pre-Op appointment is December 22nd, and we have to travel to Anchorage for Christmas. So, today I booked the rest of the familys flights on Alaska Airlines for the customary 30,000 miles so we could spend Christmas together. 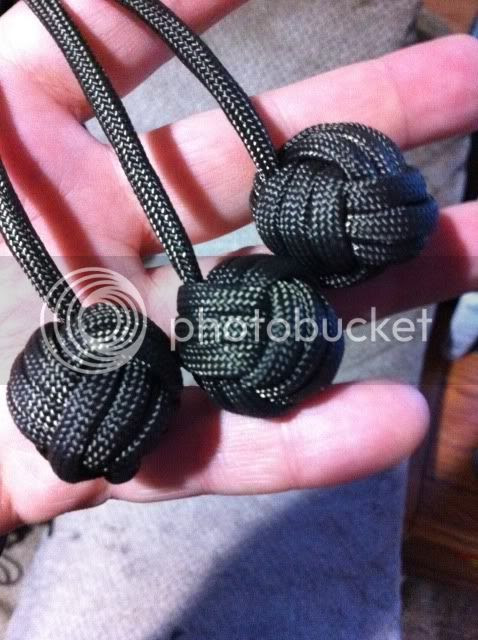 Monkey Fist - Keychains
I guess you could say I'm a little busy. Juuuuuuust a little.
Scribbled by Finnskimo 4 comments:

I'm not dead. Although I'm sure there are some mouse lovers who wish otherwise. Ah that's OK. I wish you well oh mouse lovers!

It HAS been a while though. Oops. I know, I know, "blog etiquette" states that thou shall post daily, even if thou is in thine hospital...which I wasn't. Fooled you though huh!?

He's OK though. Yay. He'll be around for a bit longer, which is AWESOME. Totally.

I've been busy shoveling the 8 foot drift in front of my house, and busy in Anchorage working, hospitaling, drinking wine with my friend, visiting family, getting rained on, and getting stuck due to weather! 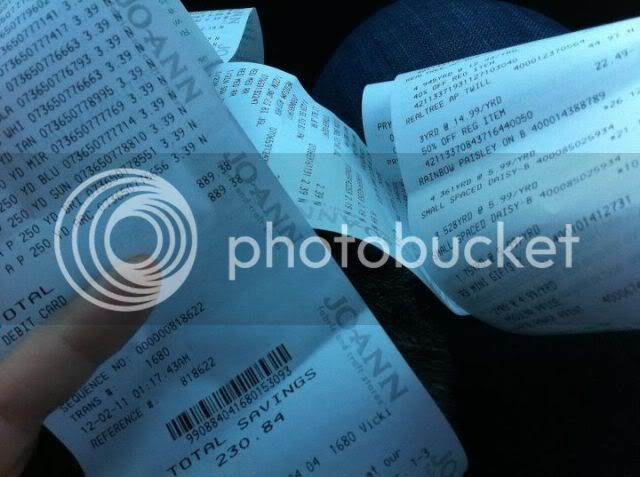 And shopping at JoAnn Fabrics! :)

It's been DUMPING snow on us left and right. Today at lunchtime I shoveled about 5 feet of snow that was over 7 feet high. Workouts!? Who needs workouts when you live HERE! 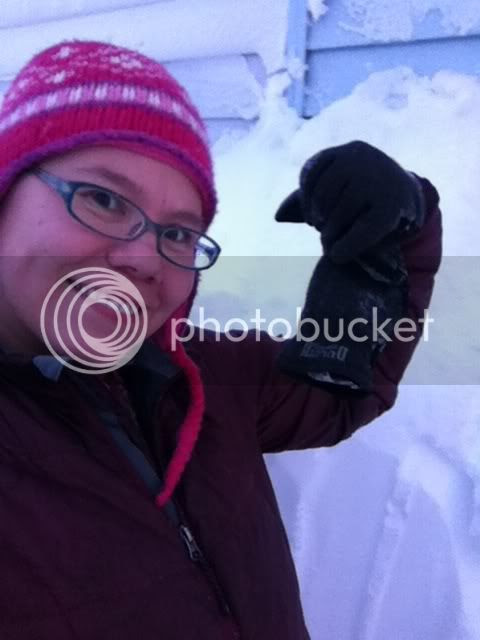 Anyway, tonight I'm teaching sewing at our Sewing Club, we usually meet Mondays but thanks to the storms we've had for the past couple of weeks, it's been postponed. SO tonight we will try to finish our Atikluk Aprons and figure out what everyone wants to do for the rest of the winter sewing season!

Have a GREAT WEEK! (And I'm back so I promise I'll post!)
Scribbled by Finnskimo 7 comments: