Leftovers.  What do we do when we find a bunch of frozen salmon from last year?  I seriously hid several fillets last year, only to "lose" them in the freezer, and while rummaging through looking for one last gallon of blueberries, FOUND the fish. 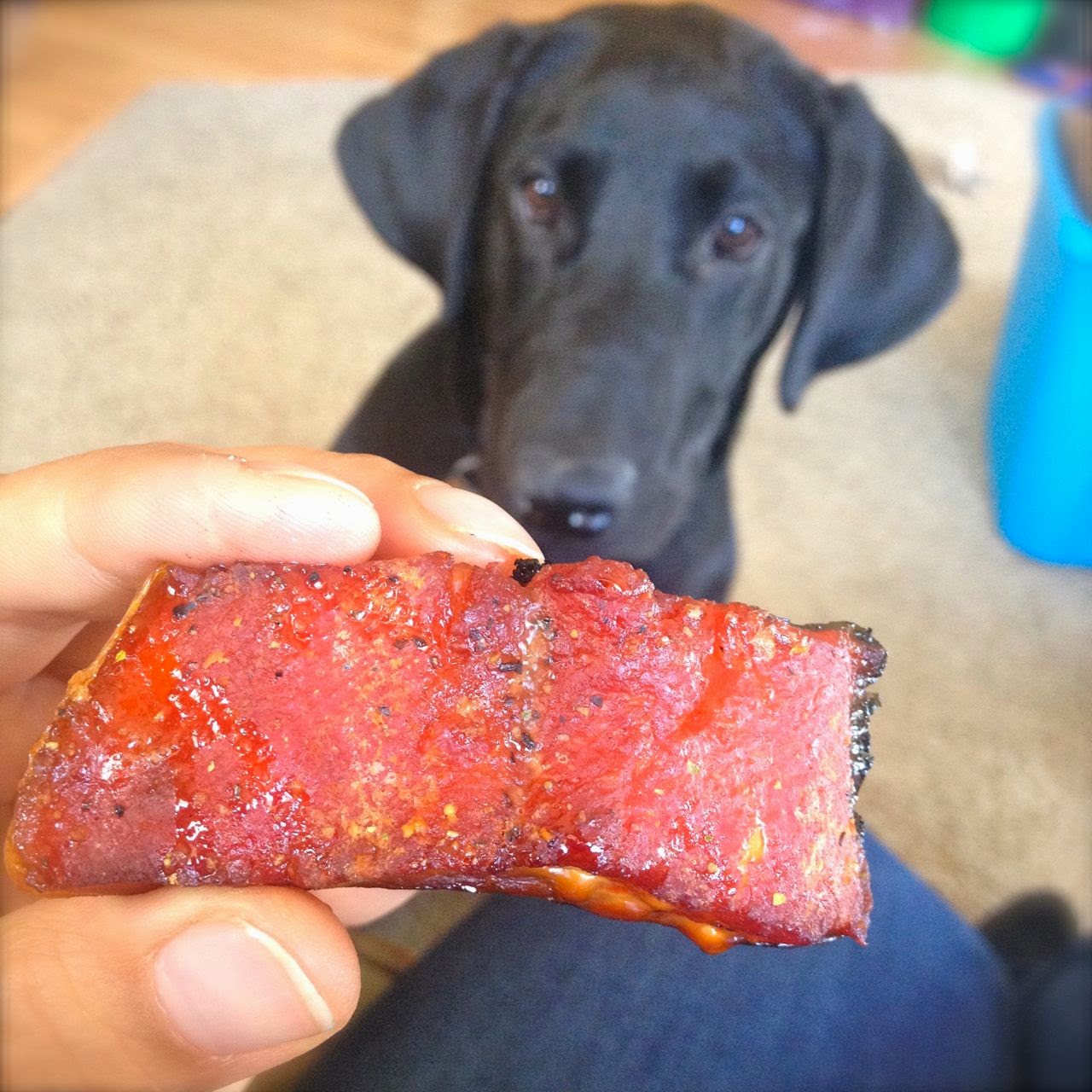 It was lost but now it's found.  Back to leftovers.  Leftover sockeye salmon?  We smoke them of course! (and then we tease our dog with the smell of smoked fish!)

Plenty of people ask me how we smoke our fish.  If I knew, I'd do it myself, but I don't know how, so my husband always has to smoke the fish.  He has a smokehouse he built out of a stainless steel freezer, a hot plate, and a cast iron skillet.  We used Peach Wood to smoke this batch, and he has ANOTHER batch going today.  Here's how HE makes smoked salmon... 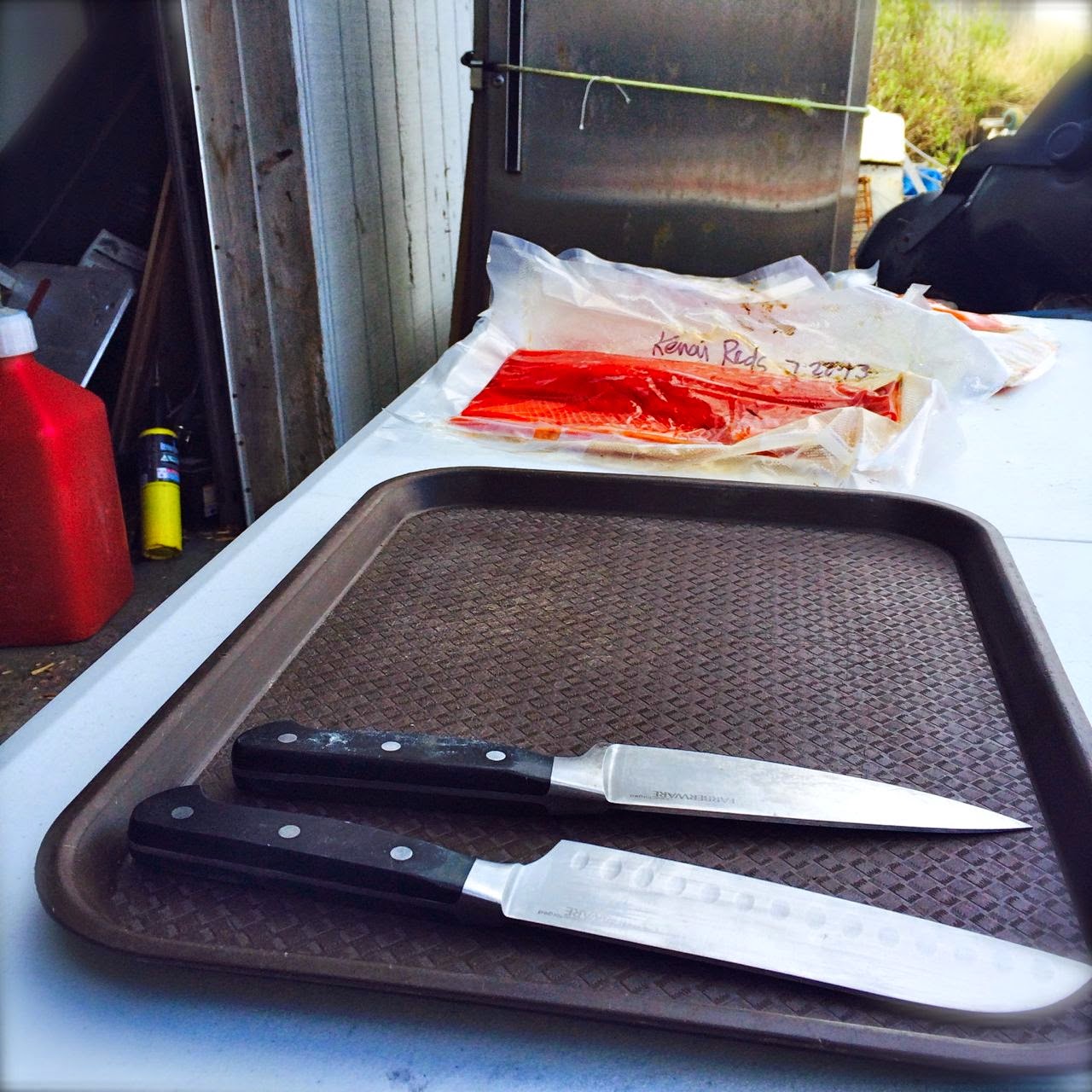 Gather all your supplies, food trays, knives, and thawed fish. 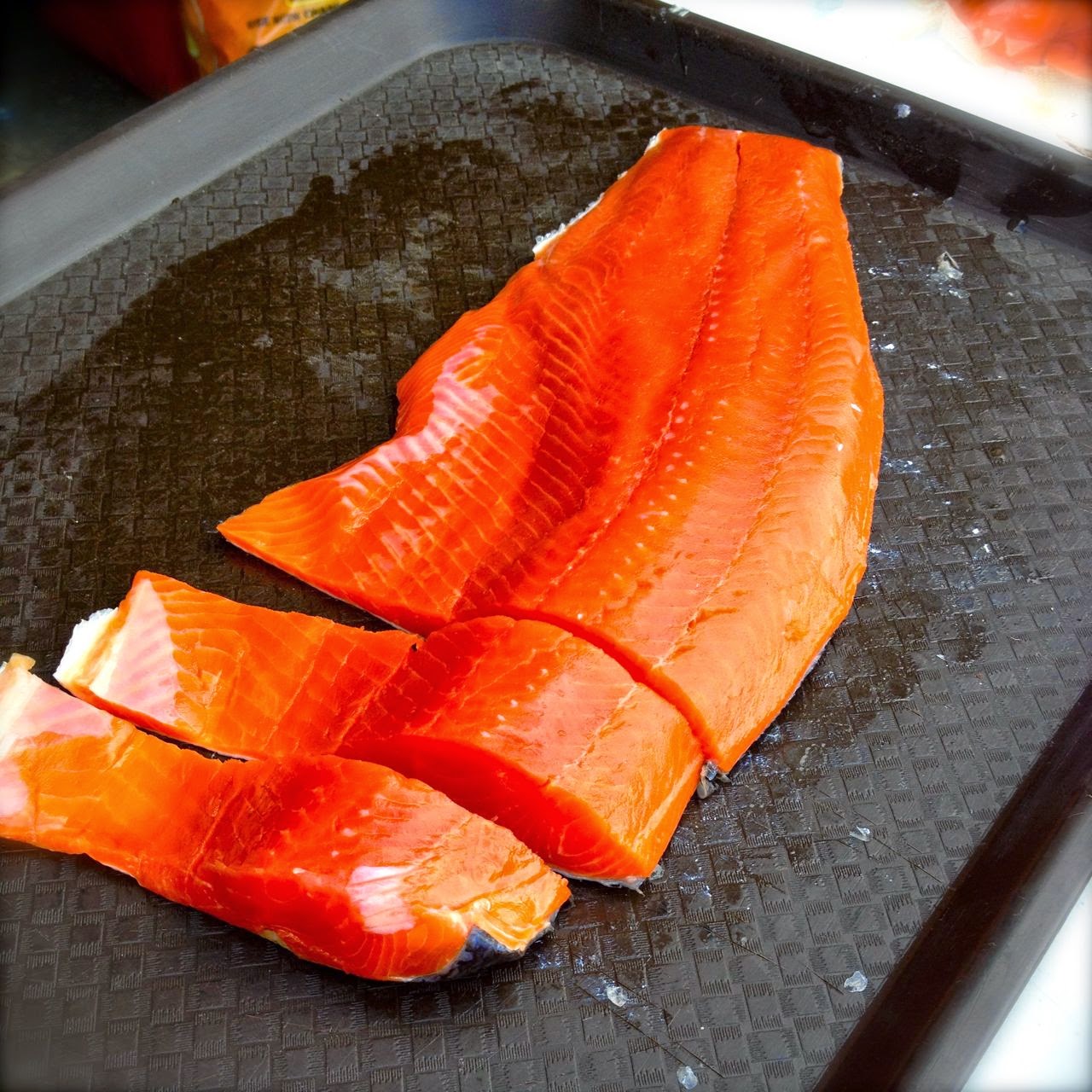 Wash, dry and cut your fish into strips. 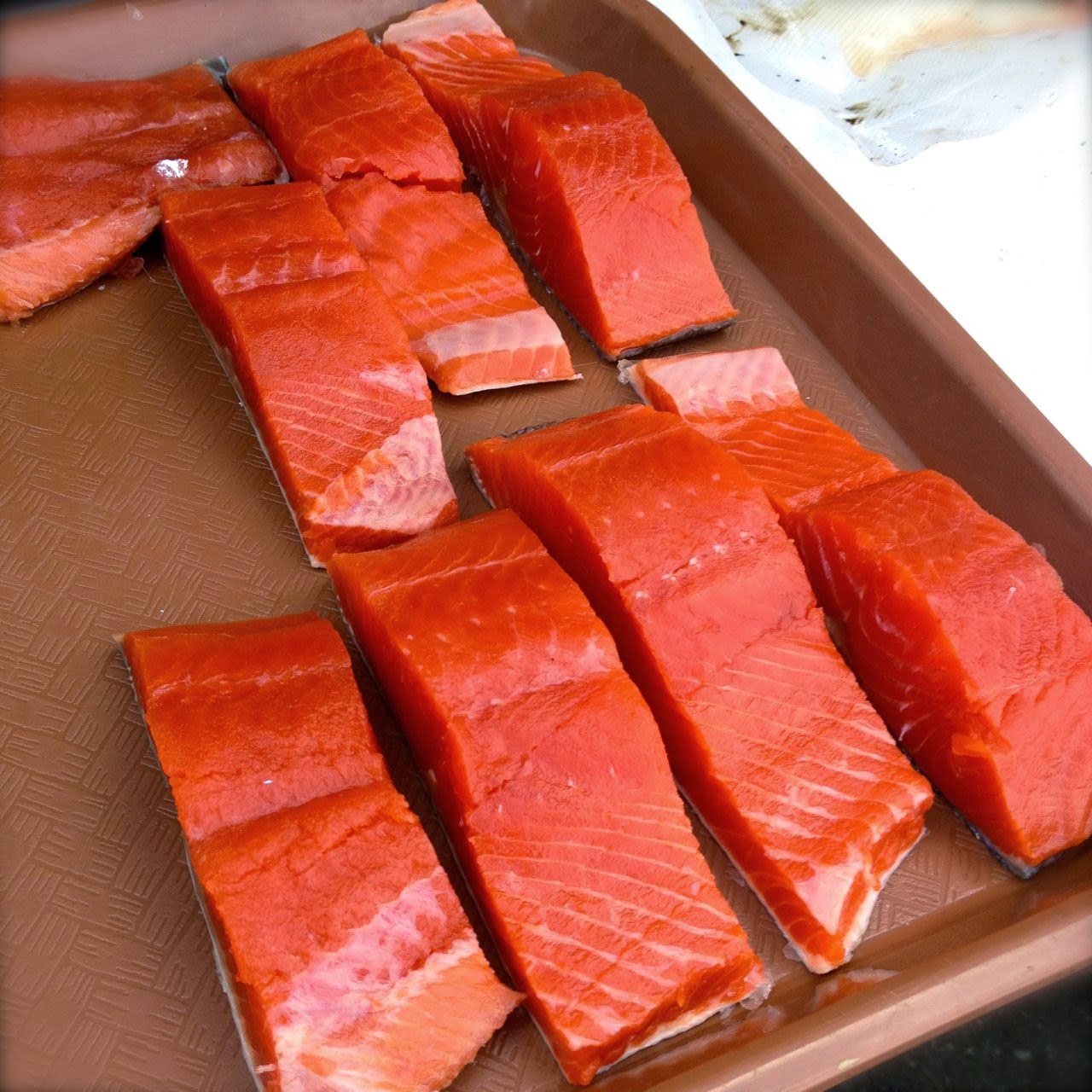 Lay them on the trays with a little bit of space between them. 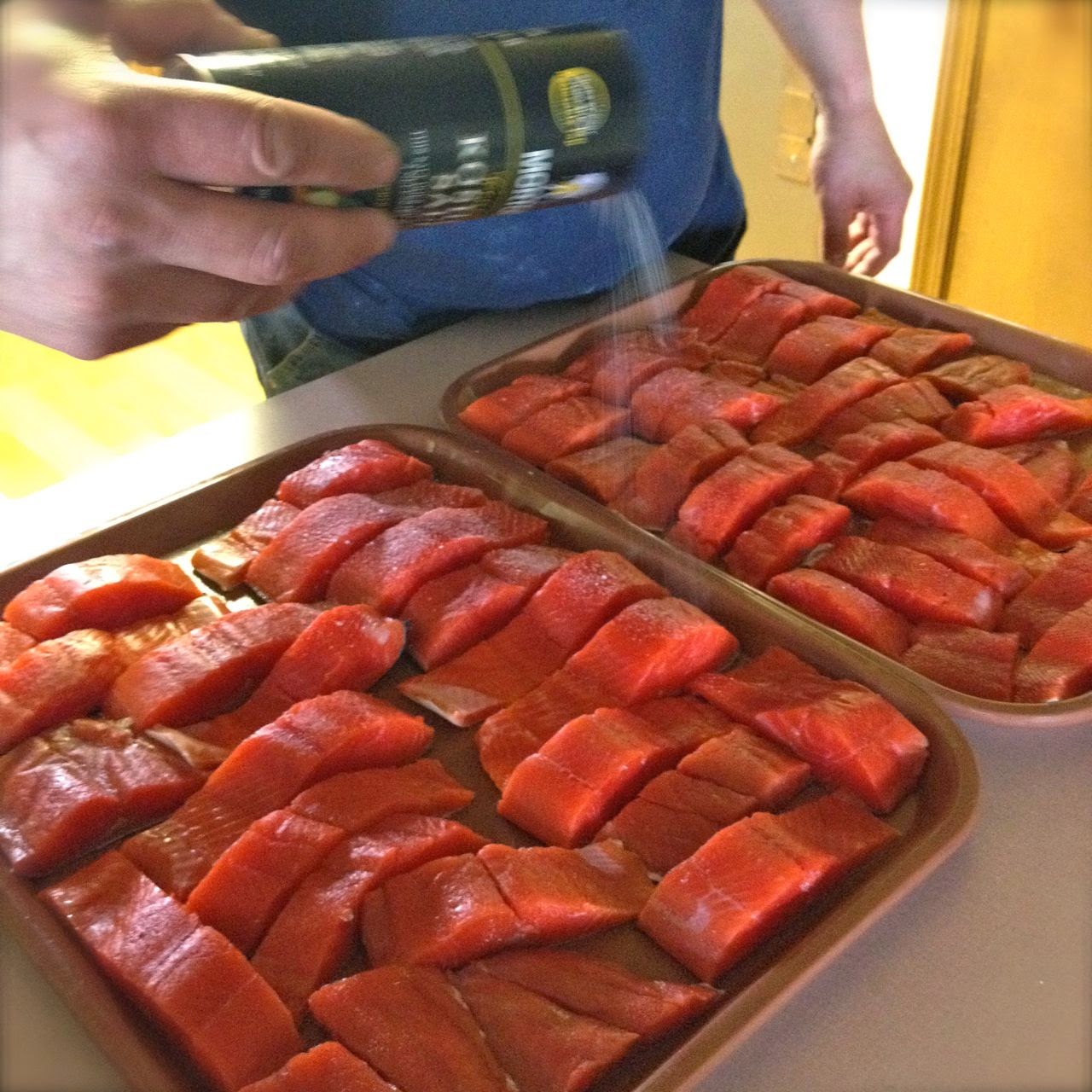 Salt the fish, and let sit for a while.  (Don't ask me how long, because I don't know!) 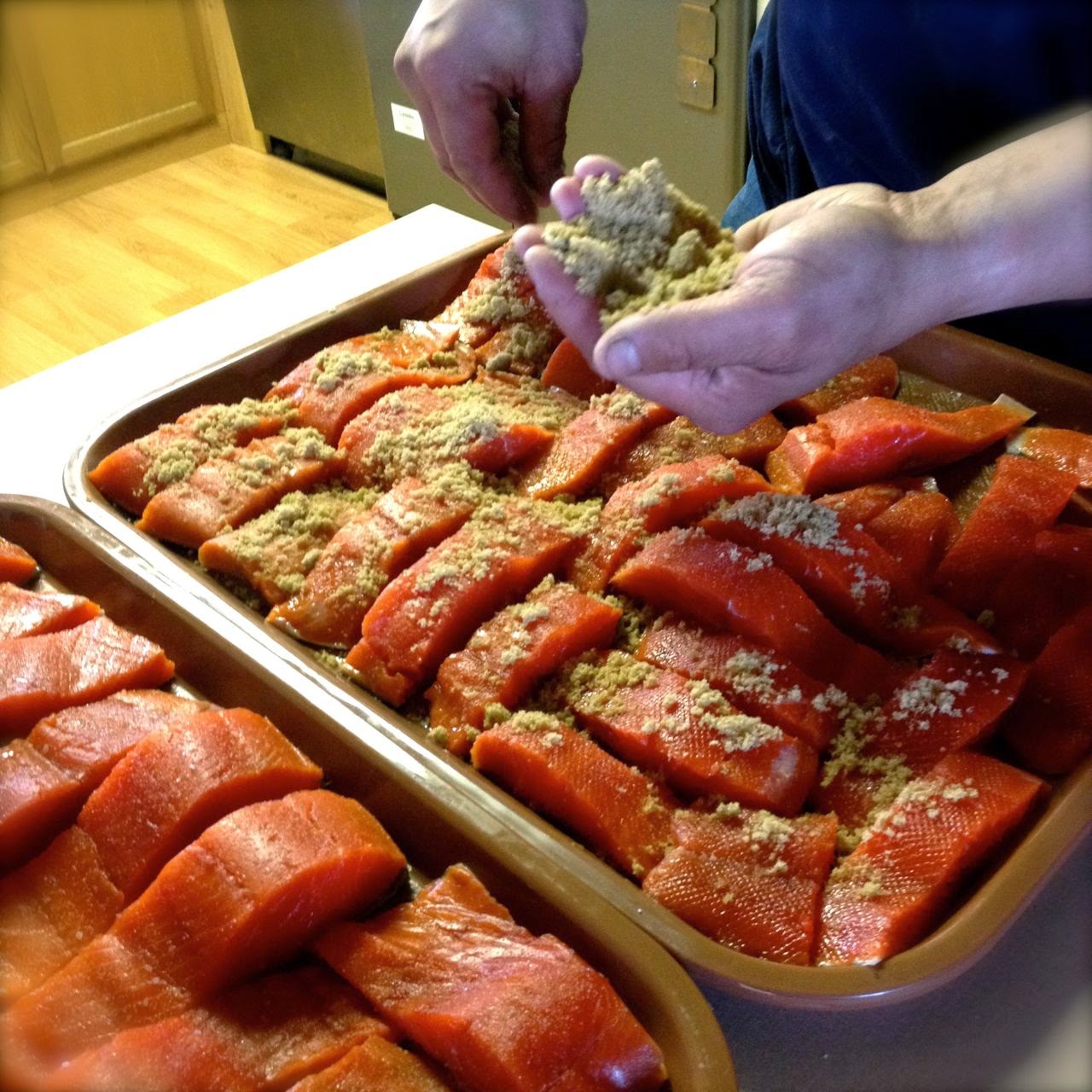 Sprinkle tons of brown sugar on them.  Apparently the salt and sugar brine, and draw out the moisture, enough so that they aren't too dry when they come out of the smokehouse. 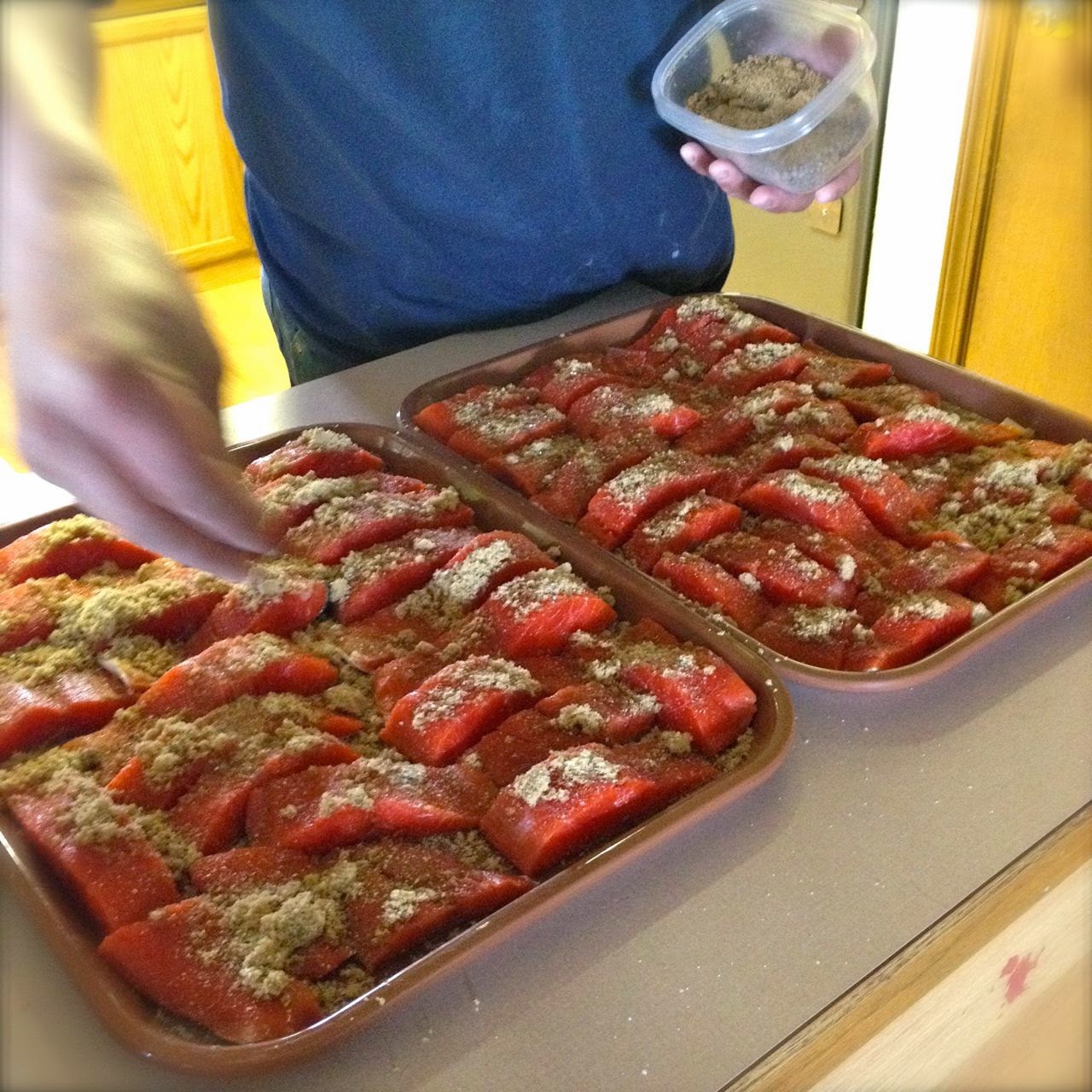 Here's the tricky part.  You know, when you're watching Diners, Drive-In's and Dives, when Guy asks what ingredients are in the "secret" ingredients... and they say, "And some secret ingredient that I can't tell you..."  Well, this is that part.  Even I don't know what he has in his special tub of secret ingredients.  I mean, I know there is some salt, some garlic, pink peppercorn, maybe some paprika?  I don't know.  Anyway, he generously sprinkles this stuff on too.  If you don't have a tub of super special secret stuff like Dean, then I don't know, use some Garlic Salt or something! 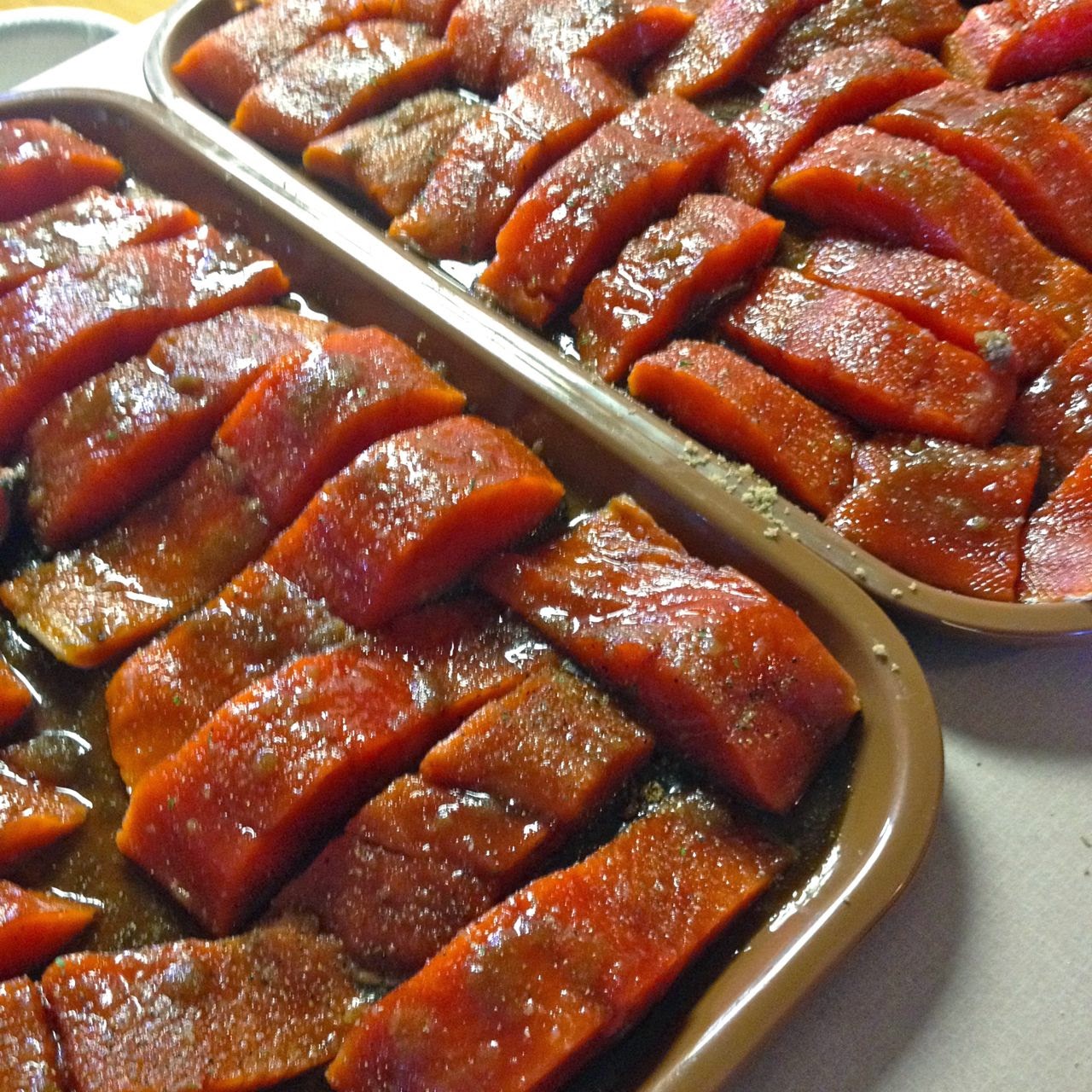 Then, you let the brine sit on them for a few hours, overnight in the fridge is best.  It looks all amazing and gooey, and smells good too! 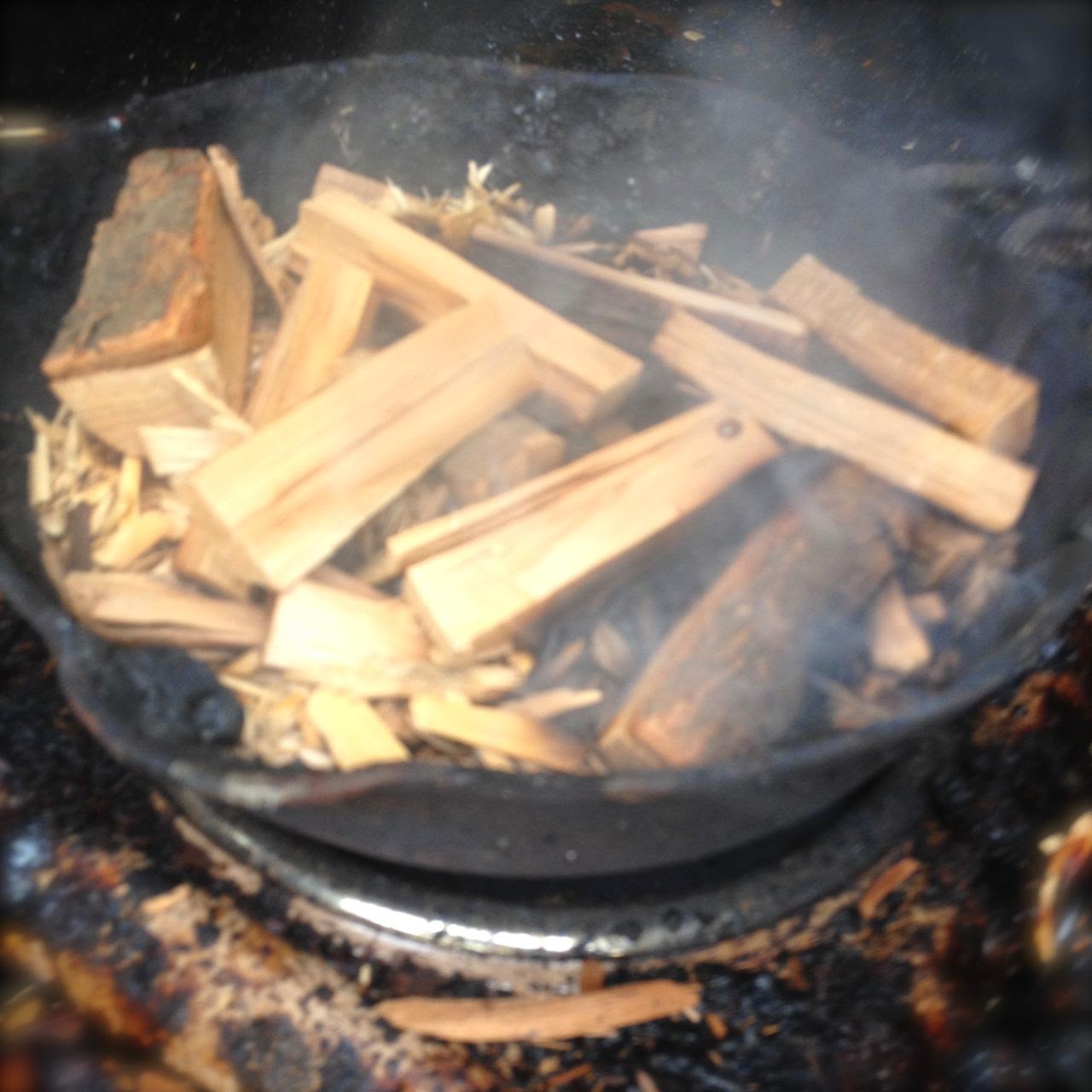 Place your fish in the smokehouse, which has been heated up for an hour or so, and maintains a constant temperature.  Again, I don't know the secret temperature, sorry about that.  He likes to hide it from me!  We used peach wood and some other kind of wood chips, maybe the jack daniels ones.  And I say "we" because I took photos... I helped!

I don't know how long you have to smoke the fish, until they're done I guess!  We hot smoke ours, so I know they're done, and OK to eat without worrying.  He can cold smoke, but I prefer the hot smoked fish, so that's mainly what we do. 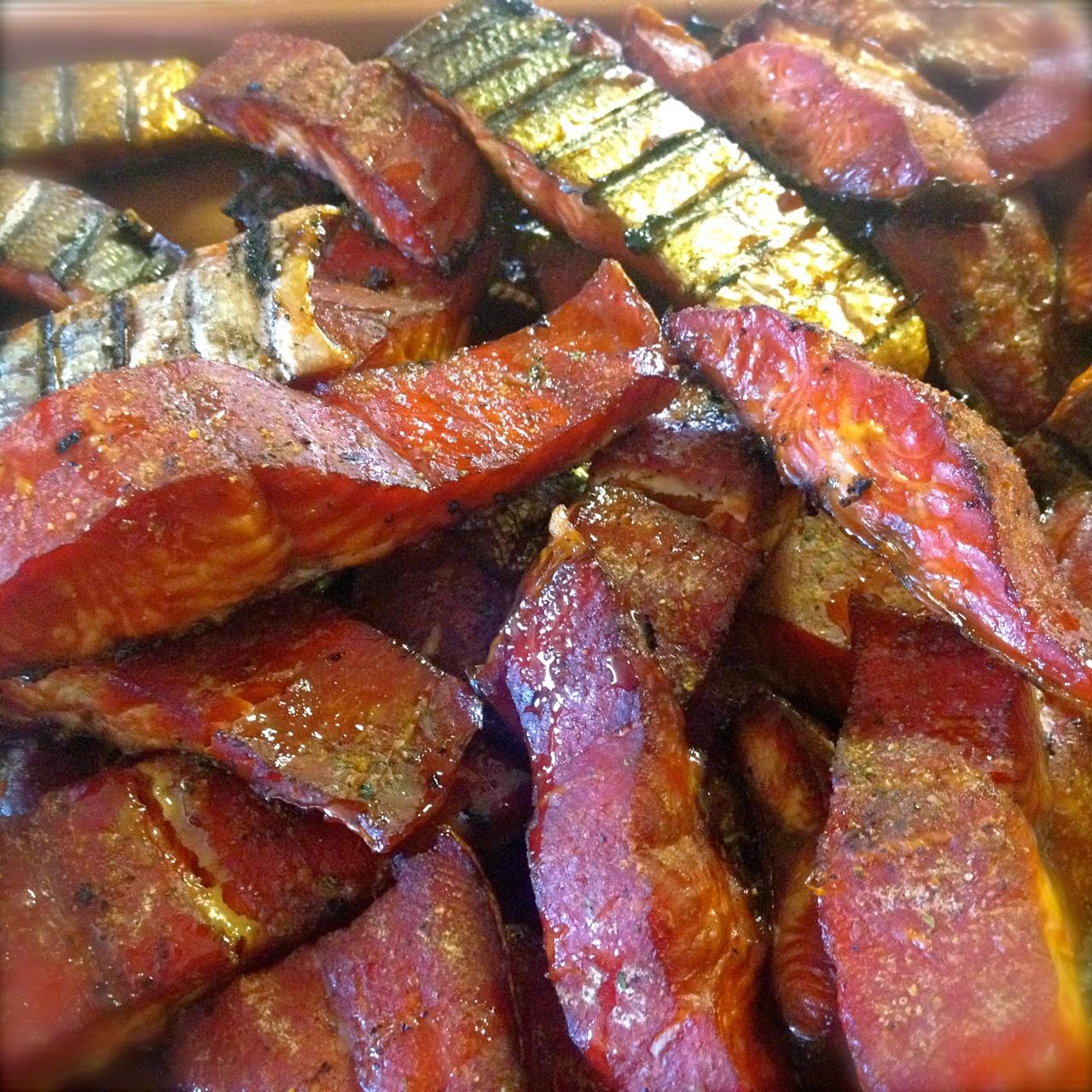 So, when they're done your entire neighborhood smells them and happens to come over to visit!  haha, Dean loves giving fish and other food he makes away, so we package them up and either eat them or give them to people to taste.

These are my favorite kind of leftovers!
Scribbled by Finnskimo

I thought I hated smoked fish until I came to Alaska and tasted somebody's there. Couldn't believe it -- better than bacon! I won't eat it down here in Michigan though, not the same at all. Nice to see you back. :)

Can I get your recipe for jelly on fireweed flowers?
trudie underscore p at Hotmail dot com